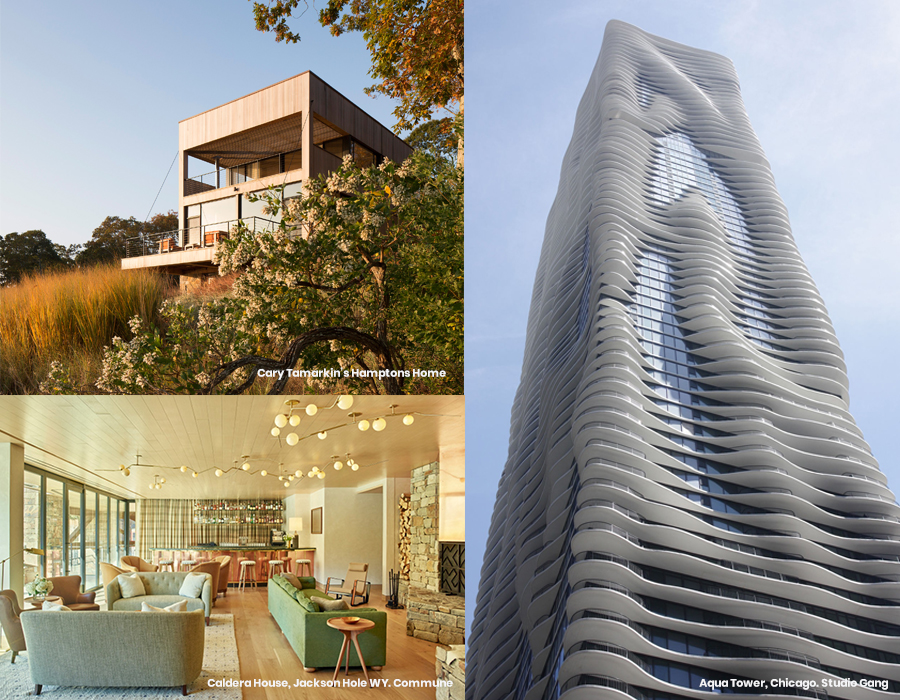 Recently, I shared a post on Instagram about Cary Tamarkin – an architect whose work I really admire. For those who have never heard the term, he is also what’s known as a “starchitect” – a portmanteau to describe an architect who has gained some form of celebrity status or fame for their work.

There are so many wonderfully designed buildings, incredible museums, gorgeous homes built by some wildly talented individuals – the list could go on forever! So, to narrow it down a bit, I’d like to share my top starchitects working today:

1. Cary Tamarkin – Known as both an architect and real estate developer, Tamarkin’s first investment, was 140 Perry Street in New York City’s Greenwich Village. He properly converted this once warehouse/stable into an incredible five-story, 25,000-square-foot condominium with eight raw space residences, each ranging from 2,000 to 4,000 square feet. His style is considered classically modern and he approaches every project combining both his passion for architecture and the business of real estate development, which is what I truly admire about him.

2. Jeanne Gang – Known for her innovative responses to environmental issues by use of recycled materials and sustainable design, American architect Jeanne Gang founded Studio Gang in Chicago, Illinois. She is best known for downtown Chicago’s Aqua Tower – an 82-story mixed-use skyscraper that, when completed in 2010, was one of the tallest buildings in the world designed by a woman.

Visit her portfolio of work here

3. Bjarke Ingels – Danish architect Bjark Ingels was first known for designing unique housing complexes around Copenhagen. He shot to rock-starchitect status when he created a ski slope out of the roof of a power plant and built an entire museum out of Legos. Ingels certainly is one of those designers that consistently pushes himself to reinvent the use of buildings and spaces.

4. Kazuyo Sejima – Japanese architect Kazuyo Sejima is known for her shiny, clean modernist designs using mostly squares and cubes. Along with her partner, Ryue Nishizawa, they won the Pritzker Architecture Prize in 2010 for their work around Germany, Switzerland, France, England, the Netherlands, United States, and Spain.

Learn more about the prize here

5. Liz Diller – American architect Liz Diller co-founded Diller Scofidio + Renfro in the late 70’s. She is also an architecture professor at Princeton University. Her firm is known for designing MoMa and The High Line in New York and Zaradye Park in Moscow.

Visit her portfolio of work here

6. Bernard Tschumi – Known as one of the more influential designers behind the Deconstructivism movement, Tschumi’s fist notable piece of work was Parc de la Villette, the third-largest park in Paris. What is most interesting about him is his take on the theory of architecture, in which he argues that there is no fixed relationship between architectural form and the events that take place within it. Some of his other notable work pieces of work are the new Acropolis Museum in Athens and Rouen Concert Hall in France.

7. Daniel Liebskind – Like Tschumi, Liebskind is also known for his Deconstructivist work like the new World Trade Center in NYC and The Jewish Museum in Berlin. He founded Studio Liebskind with his wife Nina. They have made it a priority to create architecture that is resonant, unique and sustainable – it’s almost as if they treat architecture like writing a piece of classical music.

And here are a few Los Angeles stand-outs that I love and have worked with:

1. Barbara Bestor – Since 1992, Bestor has been doing incredible renovations of private homes in and around Los Angeles. She is also know for designing the Nasty Gal Headquarters in downtown Los Angeles, Intelligentsia Coffee in Silverlake and the Toro Canyon House in Santa Barbara.

2. Ron Radziner – Ron has led the design of every project for his firm Marmol-Radziner that he co-founded in 1989. Thanks to Radziner’s unique vision, his firm has developed a reputation for innovative design and precision in applying construction standards.

View his portfolio of work here

3. Commune – A community of like-minded architects, interior designers, graphic designers, consultants, artisans, and builders, Commune is led by principals Roman Alonso and Steven Johanknecht. They are known for the work in residential and hospitality work, such as Ace Hotel and Swim Club, Tartine and Caledera House.

View their portfolio of work here

May 2022 represents the first time this year that the median sales price for Los Angeles County did...

So far this year, we've seen the median price for Los Angeles County increase every month and April...